The commissioning for the Local Area Network (LAN) project at Adventist University of Africa (AUA) took place on 27th March 2018. The Vice Chancellor, Dr. Delbert Baker alongside other staff, the contractor, and KENET engineers appended their signature to the commissioning form at the official signing event indicating the successful completion of the LAN extension project at the University. The entire project was overseen by KENET who designed the LAN and project managed the implementation after award to the contractor.

Furthering the network enhancement process, the LAN expansion project which began on January 2017 was implemented for five months between July- December 2017. The project was supervised and overseen by KENET until its completion on December 2017. The infrastructure project involved pulling fiber to new buildings, installing data points, wireless access points, switches and power systems. In addition, the ICT team at the University were trained on network maintenance and best practices.

In November 2017, three KENET engineers conducted a Direct Engineering Support (DES) and optimized their existing LAN, improving Internet experience of the students and staff. This involved redesign and configuration of the existing LAN to optimize performance. The DES also involved setup of network monitoring tools to give the ICT team visibility of the network and ease network troubleshooting. 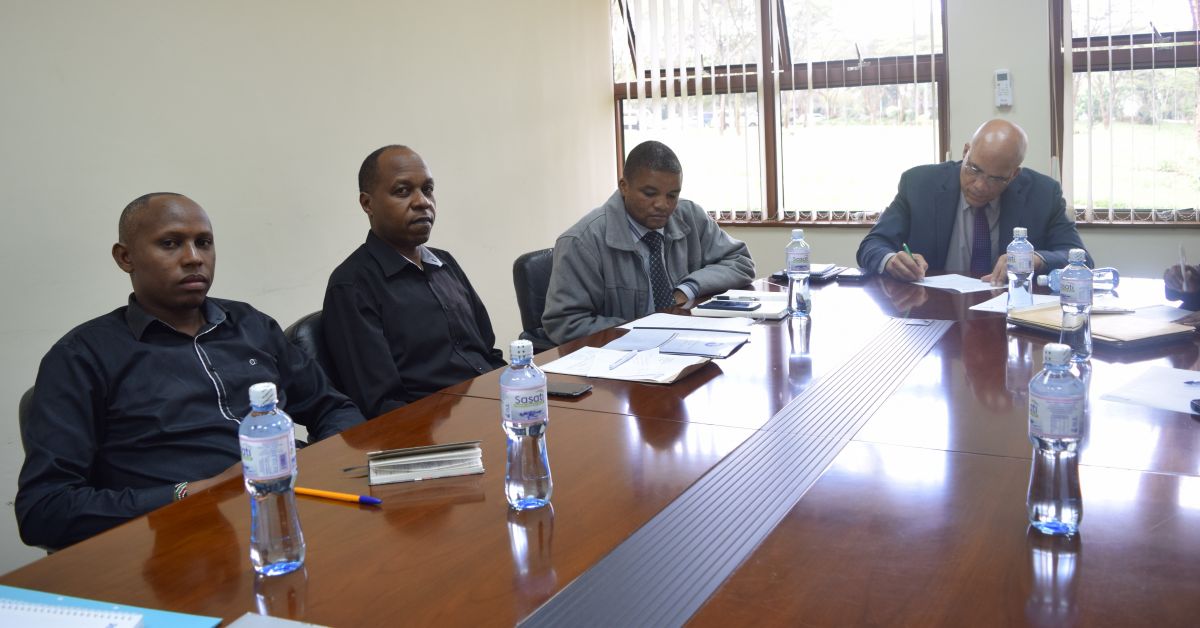 (2nd right ) and the contractors during the signing event

The LAN expansion project enhanced the University’s entire critical network infrastructure as the KENET team designed and tested the entire project according to the operational requirements of Adventist University of Africa.

“The main outcomes of the project will be that students, and staff/faculty in the Campus are connected to faster Internet speeds, and that the University will better monitor their campus network,” says Maureen Njue, Senior Systems Administrator at KENET.

The connectivity could also be used to facilitate collaborative teaching of students in other campuses and increase security management and resolution of security and other network support instances. Dr. Baker stated that the main aim of the multimillion shilling project was to increase network performance for the benefit of the students and staff at the University.

“We needed to ensure that the end user has faster speeds and encountered less problems, that was our end goal,” he commented as he expressed gratitude to the completed project.

Dr. Lossan Bonde, the ICT Director at the University noted that there has since been stability, efficient monitoring of the network devices, and faster speeds due to the optimization of Virtual LANS.  He also added that the completion of the project can now allow for optimization to reserve bandwidth for Campus services

“Our problem was not bandwidth. Our students were accessing Internet using point to point radios, but since fibre was installed, the connection to the Internet has improved,” says Dr. Bonde.

The Adventist University of Africa has branches across the Continent purposed to provide postgraduate education and has extension Campuses across Western and Southern Africa. The Institution offers a wide range of postgraduate courses such as Computer Science, Business, Theology and Public Health, and is committed to outreach services, training, and research. With the library, hostels and offices connected, other plans to cement digital learning and extensively use video conferencing to collaborate with their satellite Campuses across Africa will be made possible.